By far the most common form of racing in NZ takes place using a "wheeled sled" or "rig" on forest roads. Rig racing usually has two dimentions in "speed" and "freight".

Sled or Snow Racing Conventional sled racing is currently limited to only a couple of locations in the South Island of NZ due to restrictions placed on having dogs in National Parks.Rex Woodward. 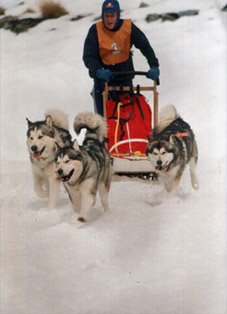 Sled dog races had been taking place in New Zealand in the late 1980's, organised by the Siberian Husky Clubs. Enthusiasts started travelling up and down the country, to get more racing in each winter, and problems arose when rules changed from club to club, and even from event to event.

From 1990 on the numbers racing grew, and the variety of classes increased, and weight pull events began to be features of sled dog sport weekends. In 1989 the Auckland Siberian Husky Club organised a 10 km race, with only 7 entries - 4 Siberian Husky teams and 3 Alaskan Malamute teams. The same year the Auckland Sled Dog Club (the first club formed specifically for sled dog enthusiasts with no breed affiliation) organised a race of 10 km for teams, and a 2 km bike race, for single dogs.

In 1990 there were more races on offer, and the freight class was introduced. Throughout 1992 a group of people worked together to develop a structure that would allow individual clubs to run their own races, but with a common set of rules. The result was the NZ Federation of Sleddog Sports, with an initial membership of the Auckland Siberian Husky Club, Auckland Sled Dog Club, Ridge Runners Sled Dog Club, Central Territories Siberian Husky Club and Northern Alaskan Malamute Club.

The NZFSS was formed in 1993, with rules based on the International Sled Dog Racing Association (IRSDA) rules, and amended for local temperatures, conditions and terrain. The development of the rules was at times contentious, as clubs wanted to cling to their local variants, but finally all agreed that the International rules should be the basis of our New Zealand rules, and they should only be amended for a very good reason. The wearing of safety helmets for single dog races was one of the more vigorously contested introduced rules! Many mushers were "free spirits" and they resented the introduction of the NZ rules which they saw as an infringement of their liberty.

Throughout 1993 to 1995 the Federation felt its way, and gained more members from the sled dog clubs who had initially doubted the effectiveness of a national body. Now, in 2000, there are 11 member clubs, covering the whole country from Auckland to Invercargill (see contacts page), all operating on a common set of rules, with registered Race Marshall's ensuring the rules are interpreted the same no matter where you race.

The first Yearbook was introduced in 1994. The Weight Pull Awards started in 1994, but it was 1997 before members could agree on a Racing Awards programme. We joined the International Federation of Sleddog Sports (IFSS) as full voting members in 1995, and the NZFSS was officially recognised by the NZ Kennel Club in 1998.